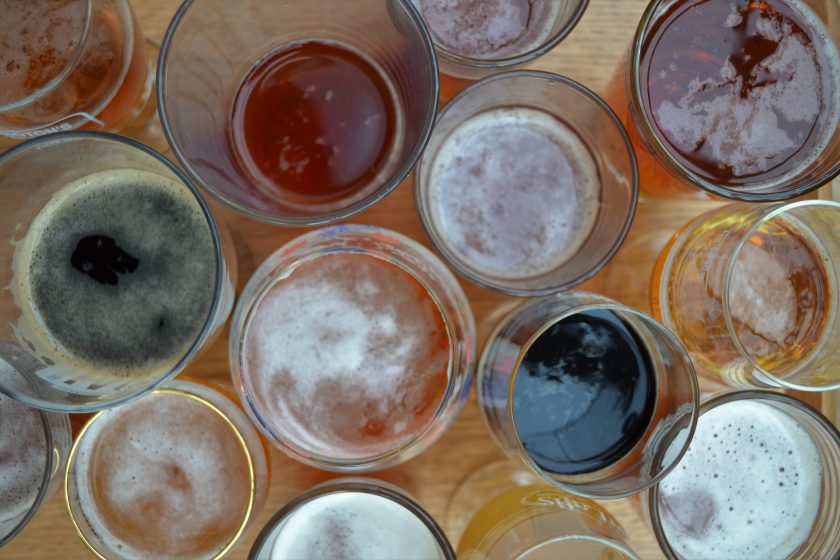 Don’t know your bitter from your mild? Would you prefer an IPA or a stout? Here’s an introduction to some of the different styles of beer we have at this year’s festival.

Need a primer on real ale, keg and craft, and how they’re made? Find out at What is beer?

Milds are not very bitter and may be dark or light. Although generally of a lower strength (less than 4%) they can also be strong. Flavour comes from the malt so there is often a little sweetness.

Bitter is the most common beer style. Usually brown, tawny, copper or amber coloured, with medium to strong bitterness. Light to medium malt character may be present. Bitters are normally up to 4% alcohol, whereas best bitters are above 4%.

Golden ales are a relative newcomer, having first appeared in the 1980s. These are pale amber, gold, yellow or straw coloured beers with light to strong bitterness and a strong hop character that creates a refreshing taste. The strength is generally less than 5.5%.

India pale ale originally appeared in the early 19th century, and has enjoyed a resurgence in the past few years. First brewed in London and Burton upon Trent for the colonial market, IPAs were strong in alcohol and high in hops. So-called IPAs with strengths of around 3.5% are not true IPAs. Look for juicy malt, citrus fruit and a big spicy, peppery bitter hop character, with strengths of 5% to much more. The recent appearance of black IPAs has confused many, since they are definitely not pale.

Lager is produced by bottom fermentation at lower temperatures (6–14°C). It is then stored for several weeks or months at close to freezing, during which time the lager matures. Most mass-produced UK lagers are matured for very short periods, but here are some lager-style beers that come closer to the original fashion.

Porters and stouts are complex in flavour and typically black or dark brown. The darkness comes from the use of dark malts. These full bodied beers generally have a pronounced bitter finish. Historically a stout would have been any stronger beer, but the term evolved to mean a strong porter beer. In modern usage, the two terms are used almost interchangeably, although stouts tend to have a roast character and be less sweet than porters. They are usually 4–8% in strength.

Barley wines range in colour from copper to tawny and dark brown. They may have a high sweetness due to residual sugars, although some barley wines are fermented right out to give a dry finish. They have an almost vinous appearance in the glass and may have a strength of up to 12%. The fruity characteristics are balanced by a medium to assertive bitterness.